‘Meet Me at the Depot’ / ‘Popman’ is the new double-A sided single from the Wind-Up Birds and it’s flipping ace. Both tracks were recorded earlier this year in Leeds by Whiskas (ex-Forward Russia) and look set to build on the acclaim and adoration attracted by last year’s ‘Tyre Fire’ and ‘Courage Now, For Tomorrow Will Be Worse’. The reviews are already rolling in…

“Coming off somewhere between The Fall and Art Brut, Leeds’ literary punksters are showing melodic promise and attitude to boot… a thrashing celebration of laziness and pop ambition” – 4 out of 5, Artrocker

“…the Wind Up Birds are important. They plough a very acceptable furrow in the rant as music field because they are articulate, talented and abrasive, not because they’re from the ever loving north … Cute, sharp, clever and rocking, we love them now as we loved them before and as you will love them in the future.” – Unpeeled.net

“Blimey I can feel hairs standing on the back of my neck and the sinews tightening, panic stricken agit punk pop all the way from Leeds courtesy of the Wind-Up Birds who thus far have seemingly tuned heads, garnered admiring glances and won acclaim from all fortunate enough to have them veer up on their radar […] directly channelled frenzied bored anthem brittleness” – Losingtoday.com

“these two tracks alone somehow condense all the excitement thus generated by the 80’s post-punk explosion into just over 5-minutes . . . Musically, lyrically, conceptually nigh on fucking perfect, this is the kind of A-side we used to put on over and over and over again. […] Fuckingfantastic!” – Jean Ecoule, Mudkiss.com 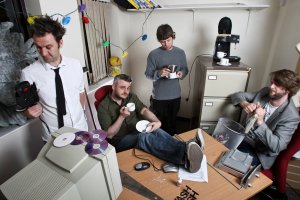 But don’t take their word for it, have a listen to the tracks yourself on the band’s Bandcamp page, and preoder the lovely 7″ vinyl while you’re at it!